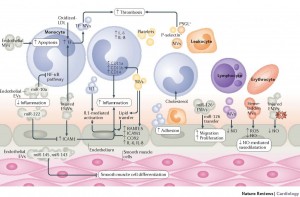 Although interest in microvesicles in the cardiovascular field emerged about 2 decades ago, that for extracellular vesicles, in particular exosomes, started to unfold a decade ago, opening new research and therapeutic avenues (Boulanger et al, Nature Review Cardiology 2017).

We previously observed an increased release of endothelial microvesicles in atheroprone conditions, mimicked by in vitro low shear stress (Vion et al, Circ Res 2013). We and others confirmed these in vitro results in heathly subjects. The release of endothelial microvesicles under low shear stress conditions resulted from an augmented Erk1/2 activity and an impaired nitric oxide release, but not from increased apoptosis.

We also quantified circulating endothelial microvesicles in the Framingham epidemiologic cohort to test the hypothesis that their levels correlate with subclinical and clinical vascular disease in this large, well-characterized human population. We observed an association with the presence of cardiometabolic risk factors, in particular dyslipidemia, underscoring the influence of high risk metabolic profiles on endothelial integrity (Amabile, Cheng et al. Eur. Heart Journal 2014).

Large EVs were preferentially taken up by infiltrating monocytes, where they caused an increased release of chemokines and inflammatory cytokines, whereas small EVs and EVs isolated from sham animals were without effects. Taken altogether, these results highlight the paracrine crosstalk between cardiac inflammatory cells and endogenously released EVs following myocardial infarction (Loyer et al., Circ. Research 2018).

Arterial cardiovascular events are the leading cause of death in patients with JAK2V617F myeloproliferative neoplasms. However, their mechanisms are poorly understood. In our recent study (Poisson et al, J. Clinical Investigation 2020)., we observed that genetically modified mice developing JAK2V617F myeloproliferative neoplasms have a strong arterial contraction in response to vasoconstrictors that could account for arterial cardiovascular events observed in patients. We then investigated the mechanisms involved and demonstrated that microvesicles, i.e. cell debris, derived from red blood cells, and circulating in the blood of patients with JAK2V617F myeloproliferative neoplasms transfer a protein (myeloperoxidase) to endothelial cells thus increasing arterial response.

We finally showed that treatments, including hydroxyurea and simvastatin, improved arterial response and could thus be attractive to prevent arterial cardiovascular events in patients with JAK2V617F myeloproliferative neoplasms 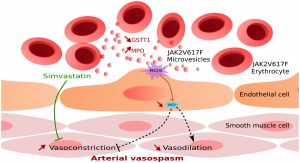 Cirrhosis is the final stage of chronic damage to the liver. About 200’000 to 500’000 individuals in France have cirrhosis and this disease is responsible for 170 000 deaths per year in Europe.

Cirrhosis is associated with portal hypertension that leads to the major complications of this disease, namely ascites and gastrointestinal bleeding. Portal hypertension results from an increase in intrahepatic resistance together with an augmentation of portal blood flow due to splanchnic and systemic vasodilation. 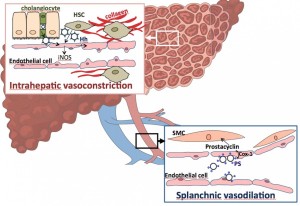 We tested this hypothesis and performed the first prospective study investigating the interest of a large panel of plasma cell-derived microvesicles to predict mortality in patients with cirrhosis. We included 242 patients with cirrhosis (139 at Beaujon Hospital, Clichy France test cohort; 103 in Barcelona, Spain, validation cohort) and analyzed their plasma microvesicle levels.

Autophagy is a major intracellular recycling system that primarily acts as a protective mechanism by preventing cell death and senescence. Under basal conditions, autophagy controls organelle and protein quality to maintain cellular homeostasis.

Under conditions of stress, autophagy acts as a survival mechanism, maintaining cellular integrity by regenerating metabolic precursors and clearing subcellular debris. Autophagy is implicated in an expanding list of diseases.

Our work is focused on the role of autophagy in endothelial cells and its involvement in the pathophysiology of diseases related to metabolic syndrome (combination of obesity, insulin resistance or type 2 diabetes, dyslipidemia and hypertension).

Atherosclerosis is the arterial consequence of the metabolic syndrome. Atherosclerosis is an inflammatory disease of large arteries which preferentially develops in particular areas of the vasculature, where the blood flow is disturbed and exerts low shear stress, such as arterial bifurcations and curvatures.

Nonalcoholic fatty liver disease (NAFLD) is the liver manifestation of the metabolic syndrome. NAFLD encompasses a spectrum of histological lesions ranging from simple steatosis to nonalcoholic steatohepatitis (NASH) which includes, in addition to steatosis, hepatocellular injury, inflammation, and varying degree of fibrosis, and can progress to cirrhosis and liver cancer.

We recently demonstrated that autophagy is defective in liver endothelial cells of patients with NASH and that this defect is induced by inflammatory mediators present in the portal blood of patients with metabolic syndrome (Figure). 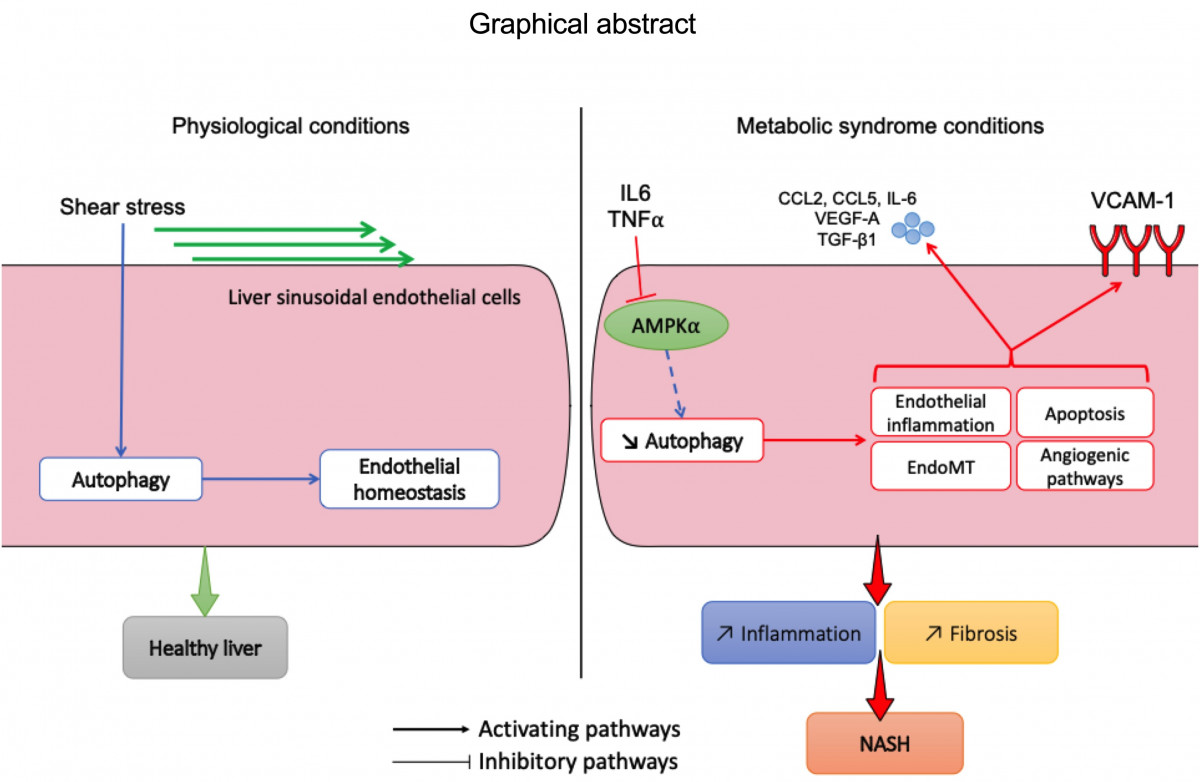